Our Week On Vacation

Mama went back to work this weekend. We had great week off, just hanging out and taking naps in a big pile every day. Her parents are back in Wisconsin for the summer, so she got to visit with them too. She made a big pot of navy beans, buttermilk cornbread, and pork chops in a bourbon marinade for dinner one night, and everyone feasted!

She *did* get the decluttering urge one day, and scared us to death. There was a lot of furniture moving, banging, and boxes piling up all over the place! We hid under the bed until it was all over. And she claims she isn’t done yet!

Anyway, things are back to what passes for normal here at Chez Cat. Mama is working again so we have hours of quiet to catch up on our sleep. We’re exhausted!

Does this cat tree make my butt look big?

And we are freezing!  What happened to spring?

"We're not moving from here until JUNE!"

In other news, our grandparents are heading up to Minoqua to a place called Patricia Lake, and will be working at a campground until September.  Mama is planning on going up for a week in July for a vacation.

We’ve also had a lot of boxes going on here.  Mama found a great deal on a desk and office chair, both of which are dark and show up our furs nicely.  Wasn’t that nice of mama?  (Note from mama–it’s a great desk from Sauder; After having cats for my whole life, I still haven’t figured out what color won’t show cat fur!)  She’s getting ready to go back to school part time in August, and needed more drawers and workspace.

There’s a rumor about lobster for dinner tomorrow night, too.  We’ll let you all know if we get any.  See you guys later!

It’s Chez Cat mama here today.  What a whirlwind four days we had!  My parents drove all the way up from Texas and spent a week here to visit with the family.  They are leaving Wisconsin today and driving down to New Mexico to start part-time jobs.  Anyway, I spent the last four days with them.

On Saturday, we went to Old World Wisconsin, an outdoor museum.  We visited a lot when we were kids, but hadn’t been there in the last 15 years or so.  It consists of buildings and businesses that were built by different ethnic groups that settled in Wisconsin from the early 1800s to about 1915.  In each building there’s an interpreter dressed in period clothing who will tell the story of the family that lived there.  Here’s some photos to give you and idea.

One of the first churches in Wisconsin.

Inside the church; the altar was painted with feathers. That’s my father standing there.

Inside one of the houses, one of the interpreters was making cornbread.

The farms are actually being worked, so they have animals in the barns and crops that are grown.

One of the henhouses.

A pair of oxen

They have a schoolhouse with replicas of the books the children used.  They are for sale in the gift shop.

The schoolhouse is from Raspberry Bay in Northern Wisconsin.

They also hold events throughout the year.  On this particular weekend, they were having a country fair with livestock judging and music.  There was even a parade with the “mayor” in a wagon.

There were vegetables on display, dresses and bonnets for sale, and later on a picnic, but we weren’t there that late.  It was a good day and brought back a lot of memories!

On Sunday we brunched at The Packing House.  Here’s me with my parents.

Can you tell my mother is an old hippie?

Here’s all of us at the brunch, and yes, that is MY Bloody Mary–I deserved it!

The food was great!

My parents stayed with my mother’s brother, and they had a kitty that of course I had to love on.  Meet Muffy (or “knucklehead” as my uncle calls him).  He’s a Maine Coon and a total loverboy.

All in all, it was a very nice long weekend with my parents.  They will be back in Wisconsin next April and work through the summer, so I will be able to see them more frequently.

And here’s a picture of my own babies who so patiently let me visit!

We hope you didn’t forget about us!

Our grandma and grandpa are coming up from Arizona, and they will be here this weekend, so we’re going to go off the air for a few days.  They have officially retired and are now traveling the country in their trailer home, so they wanted to some see us.  We’ll be back next Monday with all the news!  Have a great week! 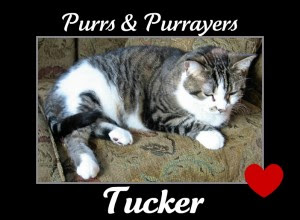 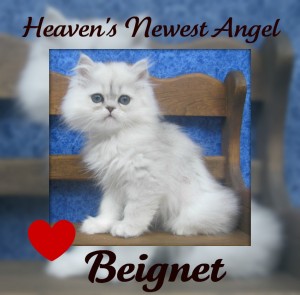 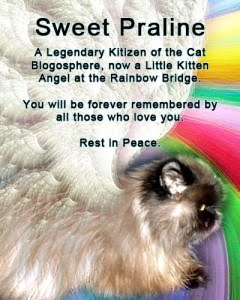 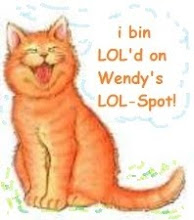